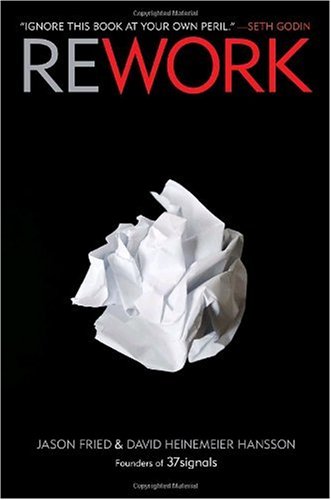 So, many argue that there’s a “new way to work”. In fact, that’s Regus’s marketing slogan. [Sue me, I have Sirius radio and hear their commercials regularly.] The 37signals guys wrote a whole book about it, titled Rework. Disclosure: I haven’t read it. But a discussion at the end of Episode 8 of Dan Benjamin’s excellent podcast, The Conversation, touched on the subject of telecommuting and how work is often becoming virtual these days. Then there’s Adam Greenfield’s early take on Rework, which gets into how companies actually organize themselves.

Dan brought up a great point towards the last fifth or so of “Virtual Sanity”, which is that, increasingly, there are two kinds of jobs: those where you can telecommute and those where you can’t. He mentions a brother-in-law who is an electrical engineer and goes into an office. I’m an aerospace engineer-cum-project manager, and I still go into an office, while I admittedly could do the bulk of my work in a telecommuting environment.

The main issue that I find in my job is that I need the ground truth. This is something that Stephen and I discuss about project management in his living room or around his dinner table. There’s often no replacement for going out and putting your eyeballs on something.

In my environment, when we’re not just pushing paper and bits around at each other, and are actually building and testing hardware, it really helps to put an eye on it. “Where is this part?” is a question best answered by, well, putting on your steel-toed boots, safety glasses, and earplugs, going out, and touching the damn thing yourself. What I find that this gets me is 1) facetime with the people who do actual work [which is always a good thing; it’s nice to know that the asshole PM actually cares about what they’re doing] and 2) ground truth. My boss reinforced with me before I became a PM was the need to go out and lay eyes on things. I think he’d argue that I still don’t do it enough, and I won’t argue with him—I’m getting guilt pangs as I’m writing this.

Admittedly, while 90% of my job—reading, responding to, and redirecting email; analyzing schedules; watching the budget; listening to the customer—could be done without getting out of bed in the morning [hooray, iPhone], that 10% where I go out and touch things and lay eyes on them is, well, 90% of the important stuff that I do in a given day. Knowing, seeing, sensing. Folks can tell me that we’re “80% done with this” as much as they want, but if I go and see that we’re only 50% done—or better, have the folks doing the work tell me that—I can calibrate my bullshit meter and more effectively manage the process.

I’ve had many a meeting where one impression of truth was controverted by me leaving the meeting and going and finding out for myself. Now, I work with a team of managers, so I have the flexibility to do that. The meeting doesn’t stop because I leave it. I’m not running the meeting, in this case, so it doesn’t stop because I stepped out. “We’re fine” can change to “we’re screwed” when I back come in and say, “Well, Joe said he needs two more days to assemble this, not one like we all thought in here.” In some cases, you can throw more resources at the problem; in others, you just accept the schedule hit. [You know the saying: you can’t have nine women get pregnant for one month and have a baby.]

So, what kinds of jobs require physical presence? I would argue that it’s simple: if you’re making a physical product, you need a physical presence. In my organization, we make hardware for use in manned spaceflight, so damned right we have to be physically present. Can I telecommute some of the time? Sure—nights and weekends. 🙂

If telecommuting is the new way to work, and maybe it is, please don’t look smugly upon us schmucks who have to go to the office. We often do cool stuff, too. 🙂

It’s easy to say that there are two kinds of project managers: process-oriented folks and seat-of-their-pants folks. [One glance at the title of this site should tell you where I lie.] But really, it’s a spectrum.

I work in a group of four project managers [counting my boss, who is really a program manager/director type]. In this group, you have:

I look at this like goaltending: you’ve got your stand-up guys, your butterfly guys, your hybrids, and your Blake Webers—just throw pads and pray.

Some thoughts and implications on the style:

JL likes to say that she “works the process until my hair is on fire, then I just do whatever I have to do at that point”. Honestly, that’s the best of both worlds, I think, and that’s why I, along with thousands of other fake-it-’til-you-make-it types, embrace things like GTD. We’re self-imposing process to keep ourselves out of trouble [and to shut the process types up when they ask for status].

What’s the value of planning in the time of crisis, you may ask?

If ever there was a moment for firms to keep their crystal balls under wraps, this may appear to be it. But many companies are still issuing annual forecasts in spite of the uncertainty roiling their markets. On February 24th, for instance, Home Depot, another American retailer, estimated that its revenues and earnings per share from continuing operations would decline by about 9% and 7% respectively in its 2009 financial year. Earlier this month, Reckitt Benckiser, another European consumer-goods group that competes with Unilever, said it was confident it could increase its revenues by 4% this year.

It is a bad plan that admits of no modification.

I’ve been mulling on this lately. The reaction is understandable: when you have a bunch of known unknowns and unknown unknowns—when things are chaotic, and history is at best a very poor guide—the desire to stop spending time planning is quite understandable. “Why come up with a plan if it’s out of date by the time it’s published?” Well, here’s why: the exercise in and of itself has value.

Publius’s comment is right, as is the old maxim that “No plan survives contact with the enemy.” You’d think that the military would understand this the most of all: millions have died because leaders were fighting the last war, and the lessons of inflexible planning have been written in blood all over our planet. And yet … the military war games as often as the budget allows. Why? Planning is a form of practice. It’s practice in thinking about what you’re going to do when faced with a situation.

The negatives come, of course, when Wall Street doesn’t allow for modification of that plan once you publish it, but that’s their problem and not yours, isn’t it? Your job is to think about your business—where you are today, where you want to be tomorrow, next quarter, next year, and five years from now—and as a manager, you have to plan. But if you find that your plans keep looking the same, you’ve gotta change something, don’t you? If you don’t, well, you’ll lose.