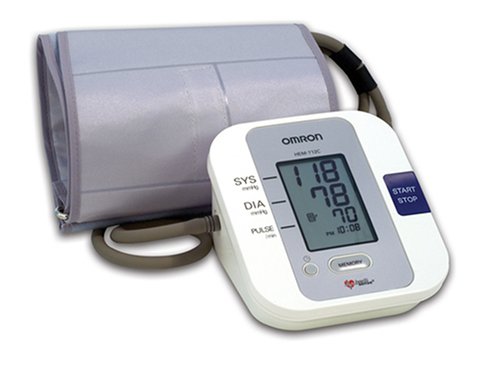 This was a discussion yesterday on Twitter, after Stephen posted his blood pressure [presumably from a checkup], and then a variety of us were discussing blood pressure and such. For those who don’t know, Mom had a severe stroke in 2000; we are blessed to still have her with us. The last couple of years, I’ve been cognizant of my blood pressure and working to reduce it with medication and lifestyle changes. [The former has had far better effect, but I’m working on the latter.]

I use an Omron automatic blood pressure monitor to check mine, and I try to measure it twice a day: in the morning after I awaken, and sometime after dinner. I keep my unit near my desk, and I will wait until I have been seated at my desk for ten to fifteen minutes before I break out the cuff. [I’ve been out here at my desk for about a half-hour after waking up, reading email and generally plugging back into the Internet.] The Omron has a memory for logging, but I choose to use my iPhone for the logging. I use IncisiveGeek’s BP Tracker, available for $1.99 in the App Store. It’s handy, and I can snag readings when I’m at the doctor’s office, too. In fact, I usually get appreciative looks from the nurse when I ask, “Hey, what was my BP and pulse rate?” and start tapping it into the screen.

For those who are curious, which includes my mother … since 24 Oct, when I started using this app, I’m running 128/75 on average. A little higher than I’d like, but given how crappy work has been of late, I’ll take it.

As a sidenote: right around the first of the year, I decided to hit Starbucks up early in the evening [don’t ask why; I don’t have a good answer]. That was a terrible choice for me, personally—my systolic spiked 25% because of the espresso, and my diastolic was up 30%. Standard levels of caffeine are generally not dangerous for me, but … whatever turbo fuel was in that cup made me feel just horrible. When I was feeling that bad, I took the reading, confirming that my BP spiking is why I felt like crap. Blood pressure is called the silent killer, but it’s really not that hard to listen to your body, folks.

[Note: this is not to say that Starbucks is bad for you, or that they were trying to kill me with that peppermint mocha. It’s just that I clearly have a sensitivity to espresso now that I have largely weaned myself from caffeine. Knowing what doesn’t work for your body is as important as knowing what does work for it.]